The bistro in Colombia that takes you to France

Amazing! Bandido is one of those restaurants that just make you feel so good upon entering the porch. Its effortless, light-hearted air spells friendliness, in stark contrast to those big brother French institutes that make you think about your every single move while eating. Nor is it trying to be one of those modern set-ups that shout Michelin stars in your face. It’s great simply because of the cheery and buzzing people who are there enjoying the moment. The relaxing and joyful patio that is filled with leafy greens and white iron outdoor furniture gives you a warm, homely feel and takes you away from all the worries that Bogotá likes very much to impose on you. You wouldn’t believe that you’re right under the Septima (one of the main roads in the city)!

The interior is a fashionable medley of mismatched chairs and tables.. Retro leather sofas next to Laura Ashley florals sit around coffee tables just like some London pub arrangements. Fleur-de-lis plates with royal reminiscence are served under retro lamps; flowery ceramics contrast sharply with a bulky radio from the 60’s. All of these together with a blown-up black and white print of Boucher reclining nude set Bandido right in the middle of French idiosyncrasies!

Food was solidly French. The all-day friendly menu reassuringly offers heavy-duty main courses as well as lighter plates such as sandwiches, tapas, salads and soups. My party had pork chop on lentils, boeuf frites with béarnaise sauce and calamari baguette sandwich. Mine was a rabbit terrine topped with truffle and a red wine pear cooked (who would have expected such delicacy in the Southern Hemisphere?). Croque-monsieur turns ‘gourmet’ with a dose of truffle (don’t worry – not everything is ‘trufflised’). The meal finished off with a chocolate volcano with vanilla ice-cream (which was really a choc fondant) and a red fruit tart. Everyone was in love with the volcano but the tart stood out of the crowd. The fresh cream custard underneath the red fruits made it unforgettable, a kind of freshness that takes you all the way to a provincial village set deeply in South West England.. Wow..

An added dose of French bistro comes on Tuesday to Saturday nights with a live DJ that plays solid sixties classics like The Temptations and Elvis, and a band of a cellist, a guitarist and a song bird who does deep tenor as well as girly tweets.

Bandido shows us the fine art of a restaurateur – that a good restaurant of a particular cuisine needs to wrap up its food with the whole package of ambience and style! 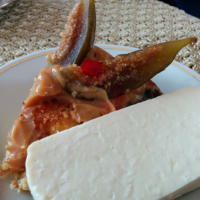