So on Tuesday there was a football game, and I wanted to be nice so I said to Mario, ‘We can do whatever you want.’ So, he took me to a place where there would be beer and TV screens, the Monkey House.

It’s a pub that has all sorts of beer that you can ever imagine. Monkey House has at least 100 species from Holland, Germany, Belgium (of course)and others scattering nationalities, which puts it on the par of Belgo (which specialises in Belgian beer only) in London, and The Globe in Hong Kong.. So, you have an idea how my expectation was driven to the max.

And then, upon checking the food menu and seeing 5 different types of curries along with fish and chips and burgers, I was reassured by the myriad of pub food choices, which further reinstated the Monkey House’s status as ‘The Pub’ in Bogota.

What was even better was the music selection! When Phil Collins aired, I was even surer that it was a Brit institution.

‘Fish and Chips’ at Monkey House

Omg. I was soooooo shocked!!!! This was the fish and chips that I ordered, apparently..!

Omg! They couldn’t possibly ruin Fish and Chips (in capital letters to show that it’s the name of a dish, it’s not just some fish with some chips) with America style wedges instead of fat cut chips? I’m not a nationalist but sometimes things have to be done the way they should be! And the dead rock-looking pieces lying on the plate were fish! Fish! Omg. It was a real fast food dish as it appeared that it was frozen food taken out of the freezer that went straight into the fryer.

And it didn’t come with mayo!

I’m so glad that I didn’t order curry. 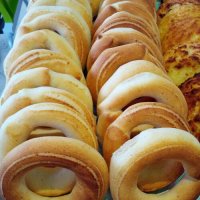